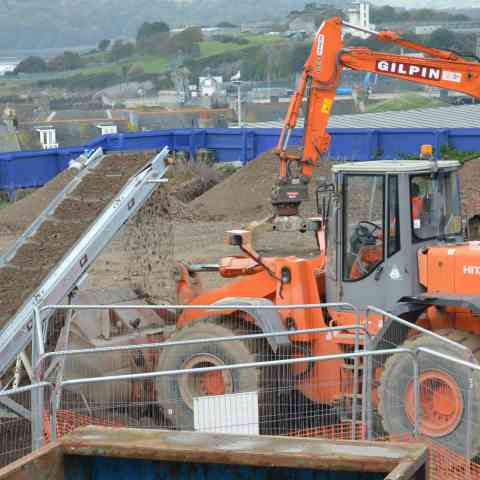 While demolishing the former Quality Hotel building in Plymouth, Gilpin Demolition needed a way to remove asbestos cement from the rubble as quickly and safely as possible.

Using the conveyor system from Coveya is very effective, enabling us to produce rates of around 60 tons per hour, which vastly speeds up our project time and reduces our programme costs. We’ve had a good relationship with Coveya; their customer service is second to none.  Paul Nicholls MCMI, Commercial Director, Gilpin Demolition Group

As Paul explains: ” We’d used other options in the past, using pre-screening buckets and riddling buckets. But this takes quite a lot of time and is a fairly unsafe option having guys working around the riddling buckets picking out the AC”.

Gilpin Demolition needed a quick and safe method for processing the material to keep their project timescales on track and their costs low. Coveya’s conveyor solution enabled Gilpin to reach rates of 60 tons per hour, vastly speeding up project time.

Coveya provided a bulk feeder hopper which fed an Easikit 1200 picking belt conveyor for operatives to sort the screened material.  This then discharged onto an Easikit Mobile conveyor to generate stockpiles of cleaned material that wheeled loaders then moved elsewhere onsite.

Using the system from Coveya – the conveyors, the hoppers, and the picking stations – is very effective. It’s enabled us to produce rates of 60 tons per hour which vastly speeds up our project time. We’ve found the system to very beneficial.

As well as benefiting from Coveya’s extensive expertise in the industry, Gilpin Demolition was impressed by how quickly Coveya responded when they needed extra help.

Paul explains; “We had a few adjustments to make at the start of the project and the Coveya team came out very swiftly, less than 24 hours after our phone call. They helped us set the conveyors and machinery up in a way that could help us meet our targets and stay on track with the processing times. The team at Coveya has been very helpful and professional throughout. We’ve had a good relationship with them. Their customer service is second to none and everything’s been going really well”.

Do you have a demolition project that could use a conveyor? Why not let Coveya see how much time and money you could save?