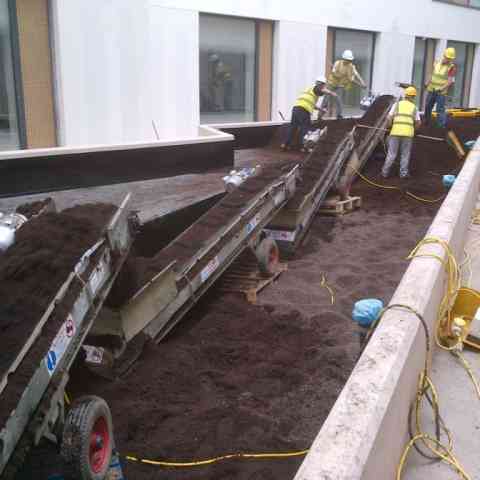 Southmead Hospital occupies a 240,000m2 site in Bristol. Towards the end of the £450m construction project, a landscaping company was commissioned to fill the large indoor planters with topsoil. However, the planters could only be accessed through a very narrow corridor. A clever solution was needed…

Once the hospital had been constructed, landscapers were brought in to fill large planter beds with topsoil. The challenge was that they were situated within the hospital’s new and modern interior with topsoil and, unfortunately, access to the planters was restricted. The only way to the area was through a very narrow corridor. This restriction prevented the use of any conventional machinery.

The alternative was to shift thousands of tons of topsoil by hand – a long, laborious and physically demanding task – or find another more cost-effective solution.

The Coveya system was able to discharge the soil at a rate of one metre per second, saving the team considerable time.

After an initial site survey, Coveya was able to help solve the problem of filling the planters by installing an Easikit 450 modular system along the narrow corridor. The conveyor was loaded with topsoil at one end and then transferred along the corridor on the conveyor into the planter area. The topsoil was then discharged as required by manoeuvring the conveyor to each planter bed and filling them up individually.

The Coveya system was able to discharge the soil at a rate of one metre per second, greatly reducing any manual labour, which would have been the only alternative.

“Coveya worked very closely with us on this project and their professionalism and speed of delivery really stood out. They didn’t just supply us, they partnered with us.“  Giles Davis, PlantCare