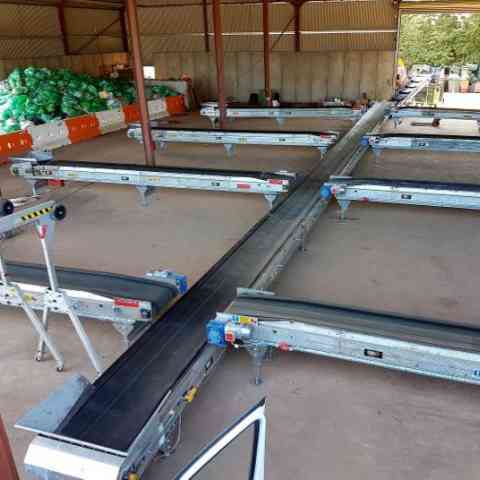 Lorde, Radiohead, Coveya, and The Foo Fighters… OK, we may not be quite as popular as these other acts, but one thing is certain – Glastonbury couldn’t happen without all of those names. And as an added bonus, you can watch our Glastonbury performance on YouTube (below) without our record label deleting the video!

So what exactly have we done to rub elbows with the likes of Katy Perry, Ed Sheeran, and, strangely enough, Jeremy Corbyn? Well, the enthusiastic festival-goers at Glasto leave behind over 2,500 tons of rubbish, which is not exactly a job for a simple skip hire. As part of Worthy Farm’s “Leave No Trace” policy, more than half of that waste is recycled, meaning an army of volunteers has to manually sift through each bag of rubbish, and that process occurs on a network of conveyor belts from Coveya.

On the Monday before the festival began, Coveya’s team of fitters arrived on site with 11 conveyor belts on two articulated lorries.  The “spider” architecture was quickly built, with eight “leg” belts for waste picking feeding onto the main removal line. With two shifts of ten volunteers on each belt and several more for unloading and loading, the 440 pickers work 16 hours a day to sort through each bag of rubbish and remove all plastic, paper, and aluminium. Even though Glasto is a strictly “no glass” festival, a few bottles of Cava and gin (we even see some Bollinger!) sneak onto the conveyors as well.

Running throughout the festival and in the quiet days following, the volunteers slowly work their way through the mountains of bin bags.  Once the main picking operation finished, Coveya packed up our 110m of conveyors and were off-site in just 3 days. But that’s not the end for Glastonbury’s waste team. Hundreds of volunteers, opportunists, and earth warriors will remain in Pilton for months, combing through every field.  These hawkeyes will hunt down every last fag end, tent post, cider can, and whippit canister, leaving Mr. Eavis’s fields as clean and clear as the day they rose from the waves.

Next year is a fallow year, which means Pilton will stay quiet so the land can recover. Though Coveya is currently tied with Elvis Costello at six, when we support the festival again in 2019, we’ll join Van Morrison and Primal Scream as a seven-time returning act at the festival.  If you need some conveyors before then, don’t talk to our manager – I’ve scribbled our number on the back of our setlist below.