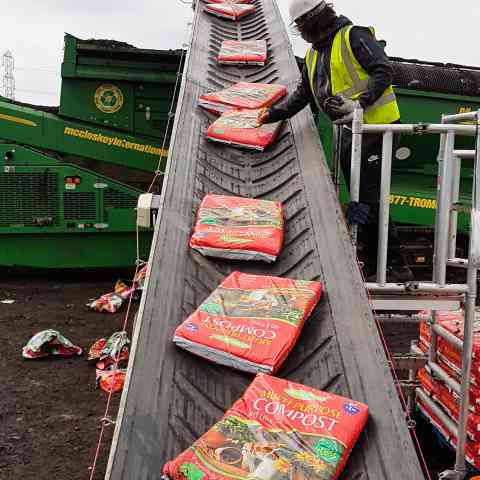 Greener Gardening Company needed a way to unpack the contents of approximately 2 million bags of compost so that it could be processed. But they had only a 2-person team to do it.

The conveyor shifted 550 bags per hour

Greener Gardening Company found themselves with 40,000 pallets of compost that needed to be unloaded, debagged, and delivered up to a screener machine for processing. That’s enough compost to fill 28 Olympic swimming pools!

Unfortunately, the pallets couldn’t be dumped straight into the hopper: each plastic bag of compost had to be split open by hand to remove the compost from the plastic.

The throughput of the screener was also taken into consideration as overloading could cause a jam and create an expensive delay. Hand-loading the hopper seemed the only solution.

But how were two workers going to lift 15kg bags up into the out-of-reach hopper all day? It was a logistical and health and safety nightmare. The team needed a steady, mechanical system to keep the hopper loaded with minimal human effort.

Coveya visited the operations manager on site and recommended an Easikit 900 conveyor to move the bags up and into the hopper. One end would be on the ground (for easy loading) and the other end of the conveyor would discharge up into the 3m high hopper.

Greener Gardening Company staff were able to take turns: one loading bags at the bottom and one standing on the platform next to the conveyor cutting them open as they passed by. Unlike a forklift or manual labour, the conveyor runs at a constant speed, 8 hours per day, with zero downtime.

With the belt running at a speed of about 1m/s, White Moss’s team of two was able to shift over 550 bags per hour, and completed roughly 1,300 pallets in the first two weeks.

The whole project took almost a year: 40,000 pallets is no small task. Once space had cleared, Greener Gardening Company hired a second Easikit 900 conveyor to double the throughput and complete the work more quickly.

Back to all case studies