How to get the best from your temporary conveyor 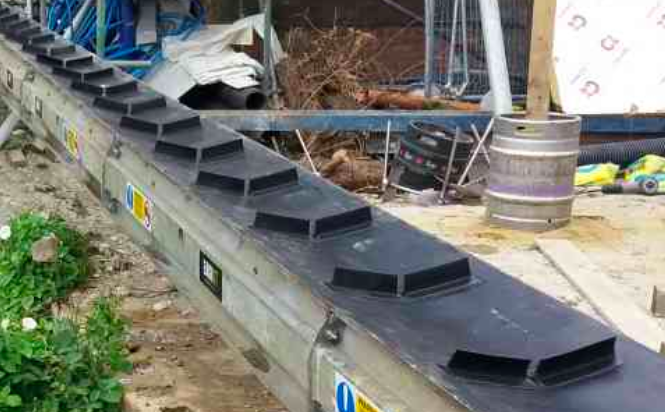 Like dumpers, cranes and any other piece of equipment, temporary conveyors also have limitations. Conveyors were designed for a consistent and continuous flow of material, which is usually not the case on demolition or construction sites. But they can still perform fantastically well provided they are correctly specified and operated.

Here at Coveya, we have been using conveyors on building sites for 30 years. We’ve seen conveyors transform efficiencies on sites and this has fueled the boom we see today in belt conveyors in construction applications.

So how do you make sure you’ll have a great experience with your conveyor? Here are our 7 tips:

Conveyors which are choked up with soil/clay/concrete etc., will not run well.  It’s fundamental that you clean out your conveyor daily (or at least check it carefully) because debris caught in the conveyor will cause two detrimental effects:

Some operators mistakenly think that the faster you load the conveyor with material the faster the job will be done. In reality, a rushed approach where material is dumped into the conveyor as fast as possible will result in underperforming conveyors, spilled material and frustrated operators.

So, if you’re loading with an excavator bucket for example, it’s well worth spending an extra second or two per load to carefully tip the material onto the belt, perhaps shaking the bucket slightly as you feed.

This works with the conveyor rather than against it and ensures the material is moved smoothly and efficiently.

3. Look out for sharp objects in your material

At Coveya we buy the very best quality conveyor belting available; from Dunlop Belting in the Netherlands.  We don’t believe in putting cheap belts from the far east on our conveyors as the resultant downtime affects not only our customers but our own operations as well.

Even so, the belts are still made from rubber and can puncture if they’re misused. In particular we always look out for lumps of concrete rubble that has cut pieces of re-bar sticking out of it as this will puncture the belt.

Once punctured, it’s usually only a matter of time until a hole becomes a tear and that will usually cause a breakdown. So the simple solution is; if you have material with sharp pieces sticking out of it, don’t put them on the conveyor.

We have customers who have had success with placing pieces like this gently on the belt by hand. However this will only work when there isn’t a transfer point where the lump will tumble onto another conveyor.

4. Keep your cable lengths as short as possible

This applies only to conveyors which are operating from a 110V single phase supply (3 phase power doesn’t suffer significantly from this).  Long 110V cables result in “voltage drop”.

Voltage drop is where the power going through the cables diminishes along the length of the cable and as 110V power is low voltage to start with; if you run too long a cable between your transformer and your conveyor, the conveyor won’t have enough power to operate properly when the power reaches it.

This lack of power will result in slow running belts, intermittent running and overloading of the motor.

Overloaded motors always fail at some stage and motors are expensive (though nothing like as expensive as downtime).  A good rule of thumb is to never have a cable run of more than 20m between your transformer and the conveyor motor – 10m is optimal.

5. If you spot some damage on your conveyor, call an engineer immediately even if it’s still running

If you spot some damage on your conveyor – usually it will be belt damage – by all means keep using the equipment if it’s still performing effectively, but you’re on borrowed time. Call your supplier as soon as you can so that they can start planning to attend site to repair it. It is going to fail sooner or later so you will have to call them anyway so it’s better to call straight away when the unit is running, rather than later when it isn’t.

If the belt is not running straight but instead is wandering off to the side, it will eventually begin to rub against the steel plates of the conveyor. This will either tear the belt along one edge or rip out some of the steel belt fasteners that we use to join the belt together.

We recommend you check the belt tracking daily, as part of your fundamental conveyor housekeeping, to make sure it is running straight at both ends of the conveyor.

Our fitters will show you how to do this when they install or deliver the conveyor, and there are full instructions in the operating manual. You will need a couple of spanners of the right size and again, our fitters will make sure you have these.

In other words, don’t start the conveyor with material sitting on the belt. Why? Because it will place undue strain on the motor.

Belt conveyors are designed to be loaded whilst running. They will start fully loaded but it is not good practice to do this and it’s best not to take the risk of damaging the conveyor.

We hope the above tips are useful and help ensure that you always have a great experience with your temporary conveyor belt.

If you’d like to talk to us about a job you need a conveyor for, or to arrange a free site visit, please contact get in touch.