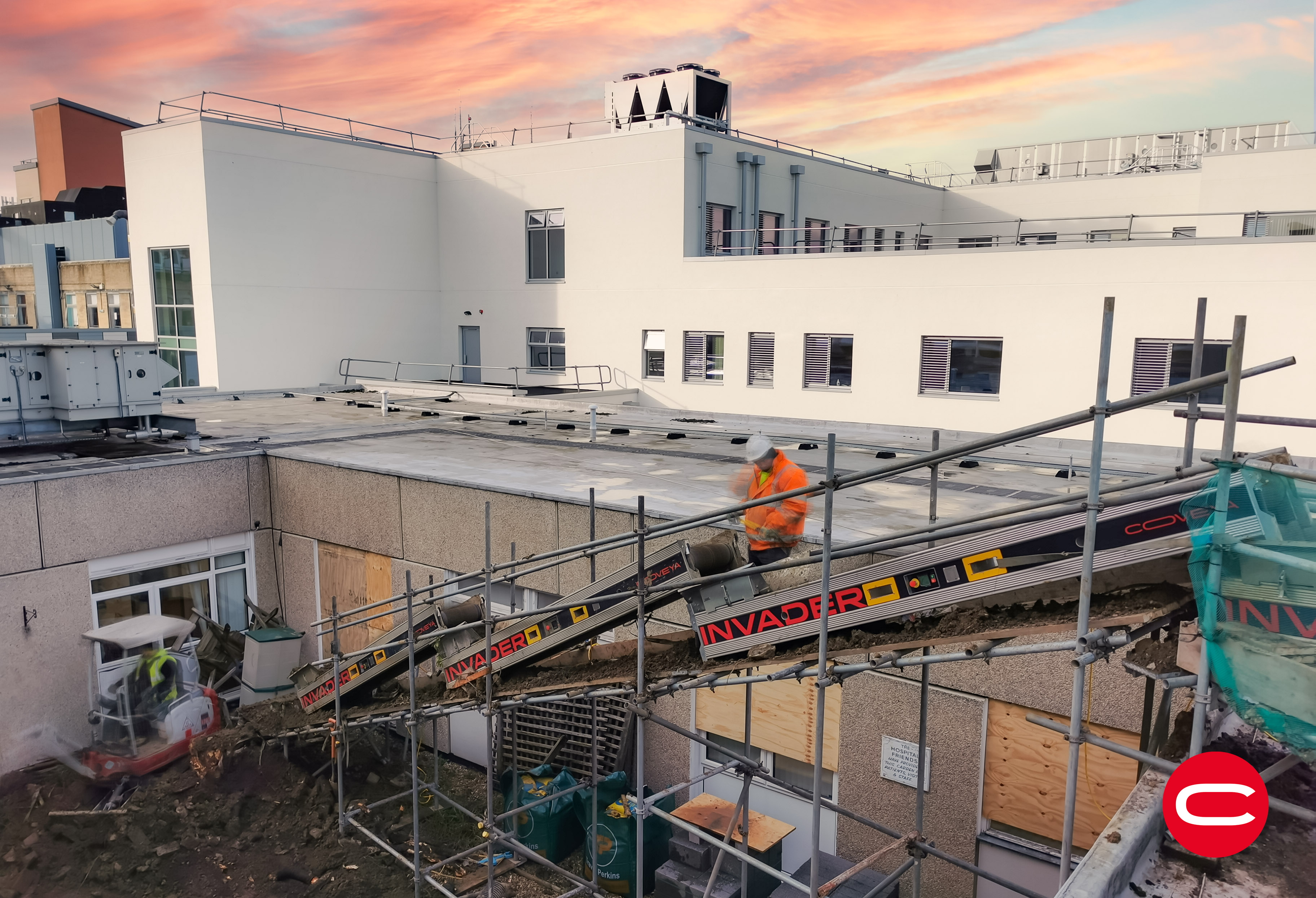 The new Spiritual Care Centre at the Royal United Hospital in Bath is neatly tucked between several departments in what used to be an enclosed garden space. While it was resourceful for the hospital to make use of the plot, the constrained area meant it was impossible for traditional digging and hauling equipment to access the site.

I could leave these conveyors running all night if I wanted to: they’re so quiet no one would even notice! Nick Radford, Project Manager, Ian Williams Construction

Initially, the contractors considered hiring a lifting crane and several skips to remove the spoil. The idea was that the groundworks crew could fill a skip in the garden area, use the crane to lift the full skip over the covered hospital corridor, and then replace it with another.

However, the cost of having a crane on site was high, and the setup logistics were complex.  Added to that, they soon realised that lifting and swinging loaded skips around tightly-packed hospital buildings was far too risky. Finally, the noise of a crane and other diesel equipment would disturb patients in the wards surrounding the garden.

Another possible option was to transport the material through the corridor. However that would have meant closing off the corridor completely, which would have severely impacted on the operation of the hospital.

Luckily, Project Manager Nick Radford had a much better idea and called Coveya. By setting up a conveyor system, Nick’s ground crew could load the spoil from the site directly onto a conveyor hopper that sat at ground level.  The 9-metre modular Easikit conveyor then took the spoil up the 35-degree angle to a height of just over 5 metres. at the top of the hospital walkway, it fed directly into a 14-metre flat conveyor, which carried the spoil away from the site and discharged onto a pile, where the spoil was hauled away.

When all the excavation material had been removed, Coveya returned to the site to reconfigure the equipment into a 14m conveyor inclined from the ground to the roof, discharging into a 4m conveyor across the roof. This configuration allowed the crew to bring in sand and other construction material via the same access route.

This project really made the most of Coveya’s modular system. Being able to simply flip around and reconfigure the conveyor system meant that minimal time was spent changing the setup. Almost as soon as the excavation had finished, construction work could begin.

Once all the groundworks materials had been moved on-site, the hired conveyors were disassembled and moved back to Coveya’s workshop to be rebuilt in different lengths for the next job. All for a fraction of the cost of hiring a lifting crane for a few weeks.